Tourist Guide to Palaces and Forts in Rajasthan

Widely renowned all over the world for their majestic presence and stunning architecture, the palaces and forts in Rajasthan are a lasting testament to India’s rich heritage and culture. They are spread all through the land, and each one comes with its own set of unique history and marvelous grandeur.

Many of these palaces, such as the Umaid Bhawan Palace, have been turned into luxury resorts for tourists to experience living amidst the rich heritage, while others are open for you to get a glimpse of the bygone eras. All these palaces have been quite successful in retaining their past glory and exquisite architecture.

While Jaipur’s Amber Fort still radiates with the charm of the Rajasthani Maharajas, the Chittorgarh Fort sprawling across the many acres still attracts visitors with tales of its great past. So, gear yourself up, as in this article we will take a deep look into the majestic palaces and forts of Rajasthan and get a glimpse of its majestic past!

Formerly known as Jag Niwas, Lake Palace was built sometime between 1743 to 1746 by Maharana Jagat Singh II. Built to serve as a summer palace for the royal Mewar Dynasty of Rajasthan, it spans across an area of 4 acres on the Jag Niwas island, situated on the Lake Pichola, Udaipur.

The palace has been designed to face towards the east side so that the members of the Rajasthani royal family would be able to pray to the Sun at the crack of dawn. The floors of the palace are neatly tiled with black and white marble with the walls being embedded with vibrantly colored arabesques. The palace has a rich history of playing an important role in the 1847 mutiny, providing refuge to many European families who had escaped from Nimach.

In 1971 the palace was handed over to Taj Hotels and Resorts Palaces for the ease of maintenance. Currently, there are 83 rooms in the Lake Palace and have gained popularity as one of the most romantic palaces in India. 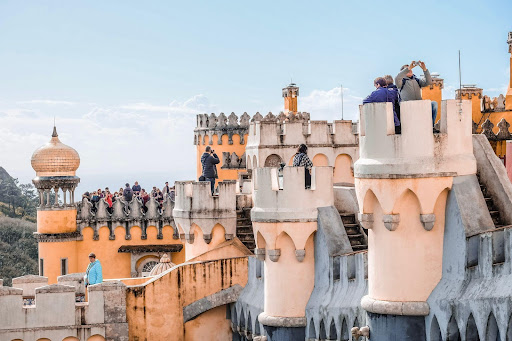 Falling amongst one of the most royal palaces in India, Neemrana Fort Palace is famous for being situated atop a high hillock, thus offering stunning panoramic views into the far-spread city of Alwar. This mesmerizing palace has now been turned into a heritage hotel to offer a dose of tranquility to those looking for a getaway from the hustle and bustle of city life.

Originally built in 1467 by Raja Dup Singh, the palace derived its name from the local chieftain Nimola Meo, who was widely known for his courage and bravery. Being one of the oldest heritage hotel resorts in the country, the Neemrana Fort Palace was converted into one back in 1986. This palace is a must-visit if you want to get acquainted with the rich culture of the city or enjoy a luxurious trip to Rajasthan. 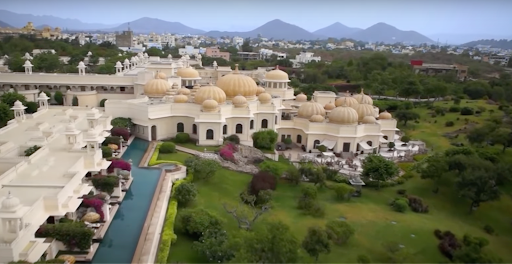 If Udaipur is the royal sojourn of the princely state, the Udai Vilas Palace is one of the most notable palaces in the city. Settled upon Lake Pichola, the magnificent palace building is famous for its traditional style of architecture and flamboyant artistic designs.

The palace is adorned beautifully decorated with a vast array of fountains, gardens of succulents, and dramatic courtyards, that are bound to leave your eyes and heart fulfilled. The palace was recently converted into a heritage hotel by the Oberoi Group of Hotels.

Located at 27 kilometers from the Airport, the Udai Vilas Palace has been ranked as the fifth-best hotel in the world and the best hotel in Asia. The guests in the hotel are treated with royal respect and served delicacies by chefs who had predecessors who served the royal family. 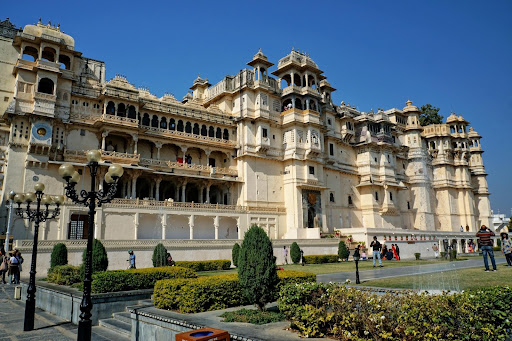 Built by Maharaja Udai Singh back in 1559, the city palace was established as a capital for the Sisodia Rajpur clan. The one palace complex comprises numerous palaces that fall within its periphery. Situated on the east banks of Pichola Lake, it is built in a very lively and vibrant manner. Rather unique in style, the palace falls amongst the largest palaces of Rajasthan.

The architecture is an amalgamation of traditional Rajput style mixed with a touch of Mughal style and situated on the top of a hill, it offers to you a panoramic view of the city along with its neighboring structures such as the Neemach Mata Mandir, Monsoon Palace, Jag Mandir, and the lake palace.

A quick fact about the building is that it was used as a filming location for the famous James Bond movie Octopussy. 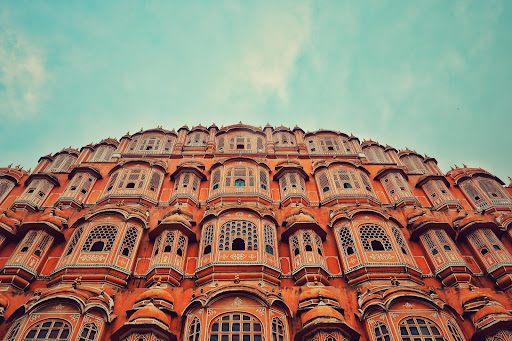 Built back in 1798 by Maharaja Sawai Pratap Singh, the Hawa Mahal was designed to resemble the crown of Lord Krishna. Located in the heart of Jaipur, this palace is constructed entirely from sandstone and red bricks and falls amongst the most popular palaces in Rajasthan. Although the palace has an exterior of five stories, the 953 small windows or Jharokhas are designed in a pattern that closely resembles a honeycomb of beehives.

Hawa Mahal translates to the palace of winds, which is a perfect description of the palace’s airy structure. Utilizing the venturi effect, the design of the palace creates an air conditioning effect inside. The intricate structure also served the purpose of a veil, which let the women of the royal household observe the regular activities going on the streets without being seen themselves since they were expected to follow the strict rules of the face-covering or Purdah system.

The Hawa Mahal starts as a part of the City Palace and extends to the Harem Chambers or the Zenana. We recommend you visit this palace early in the morning since the red color of the palace becomes extremely vibrant and vivid in the bright glow of the morning sun.

Located on the top of the Aravali Hills, the Mahal has a sprawling courtyard that is filled with a huge array of marvelous getaways, jharokhas, battlements, and turrets. The palace is owned by the royal family of Chundawat, who still resides in the palace.

The palace is basically a beautiful village that is situated on the top of a hill, 2100 feet above sea level. Converted into a heritage hotel, it now has up to 50 gorgeous rooms that are equipped with all kinds of modern amenities such as gyms, jacuzzi, and swimming pools. If you are traveling between Udaipur and Jodhpur, the Deogarh palace is the perfect place to visit.

Constructed with a combination of Rajput and Mughal styles of architecture, the Jal mahal palace is an absolute treat to the eyes. Just as the name signifies, the palace is situated right in the middle of the Man Sagar Lake. The palace along with the lake has gone through several restoration processes, with the last one taking place back in the 18th Century by Maharaja Jai Singh II of Amber.

Much like the Hawa Mahal, the palace building has a 5 storied structure, but four of its floors usually remain underwater, whenever the lake is full. The terrace has a magnificent garden that is surrounded by a structure of semi-octagonal towers, with one cupola situated at each one of the four corners. Five nestling islands have also been created around the lake to attract migratory birds. 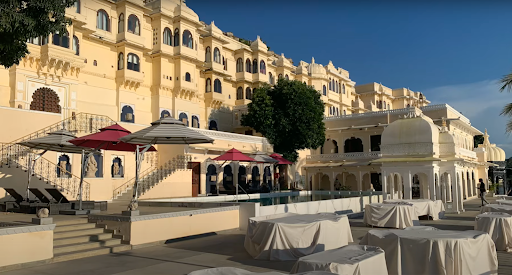 Situated within the borders of the Chittorgarh Fort Complex, which is also the largest fort in India, the Fateh Prakash Palace is undoubtedly one of the most Majestic palaces in Rajasthan. Created by Rana Fateh Singh, this palace is located near the palace of Rana Khumba. Also known by the name of Badal Mahal,  the Fateh Prakash Palace was built back in 1885 to 1930.

Much of the architectural styling of the Mahal resembles the British phase style combined with a little bit of Mewar style, with cusped arches, large halls, and high ceilinged spaces. The huge dome structure of the mahal is coated with intricate lime stucco work and lime concrete material, giving off a tranquil yet magnificent look. You might resemblance of the construction form of this palace with that of the Durbar Hall in the City Palace of Udaipur. 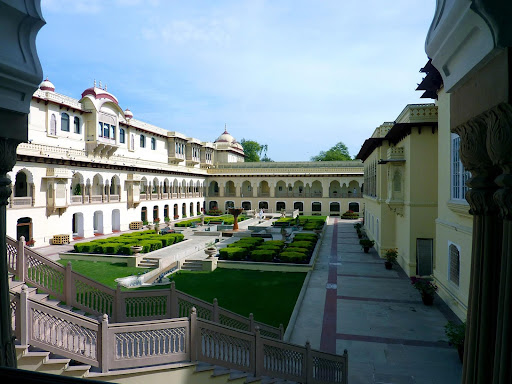 Being the home of the Maharaja of Jaipur, this Mahal comes with a particularly interesting piece of history. Initially built in 1835, the first building of the Mahal was created as a garden house, which Maharaja Sawai Madho Singh later transformed into a hunting lodge since it was situated in the middle of a thick forest region.

Even later in the 20th century was this hunting lodge was expanded and turned into a palace. With the independence of India, this palace was taken over by the Government of India, and by the 1950s, the royal family felt that the charges of maintaining this palace were too costly.

Thus, in 1957 they decided to turn the palace into a heritage hotel.

Considered to fall amongst the most luxurious hotels across the globe, this hotel falls under the Taj Group of Hotels. Owing to its magnificent architecture, intricate design, and marvelous structure, this palace falls under the category of favorite tourist destinations.

Created in the 17th century, the Jagmandir Palace is now a royal vintage palace that takes pride in serving its 21st-century guests. The palace is now accommodated with all kinds of modern-day amenities such as spas, bars, world-class restaurants, and all-day cafes, thus offering to the guests a royal experience that is set in the modern-day surroundings.

Since the palace is situated in the middle of a lake, guests must be ferried to reach the Jagmandir island palace. The alluring elegance of the palace has given it the name of Swarg ki Vatika, or what can be translated to Garden of Heaven.

Popular all across the globe for their age-old architectural grandeur, detailed edifices, and beautiful and intricate structures, the palaces of Rajasthan are evidence of the rich ore of heritage and culture that the country has. There is almost no better way to take a break from the hustle of city life than to tuck yourself in the peaceful grandeur of Rajsthan’s magnificent forts and palaces.

So, it is about time that you immerse your soul in the regal beauty of Rajasthan! Pack your bags quickly and do not keep your camera behind! You will find some of the most picture-worthy spots of your life within the beautiful interiors of the rich Marwari heritage!