Best places to visit in Delhi in one day

Delhi as a capital of India and Indira Gandhi International airport is a major stop over for foreign tourists. This guide helps you make most of a day you spend in Delhi from where to visit, where to eat, and where to stay.

READ MORE:
You require India e-Tourist Visa (eVisa India or Indian Visa Online) to partake in the pleasures as a foreign national in India. Alternatively, you could be visiting India on a India e-Business Visa and want to do some recreation and sight-seeing in Delhi. The Indian Immigration Authority encourages visitors to India to apply for Indian Visa Online (India e-Visa) rather than visiting Indian Consulate or Indian Embassy.

What to see in Delhi? 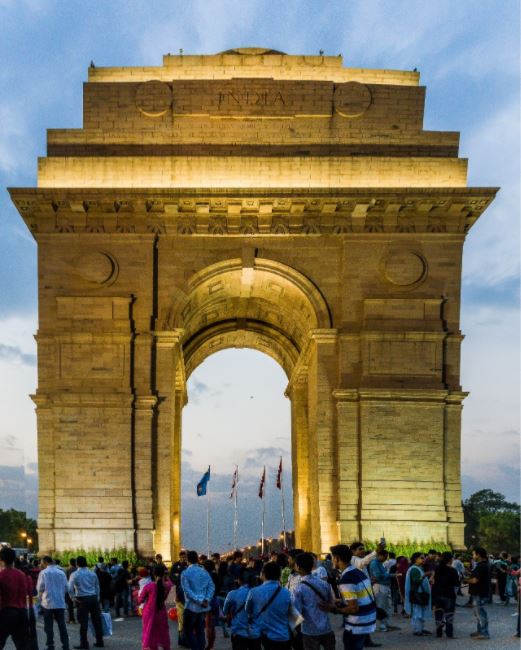 The structure is a sandstone arch built by the British in the 20th century. The famous monument is a mark of the 70,000 British India’s lost soldiers in the first world war. Erstwhile, it was called Kingsway. India Gate was designed by Sir Edward Lutyens. Since 1971, after the Bangladesh war, the monument is known as Amar Jawan Jyoti stands to be India's tomb of the soldiers lost in the war.

The construction of this exemplary structure in the shape of the white lotus was completed in 1986. The temple is a religious site of the people of the Bahai faith. The temple provides space for visitors to connect with their spiritual selves with the help of meditation and prayer. The outside space of the temple consists of green gardens and nine reflecting pools. 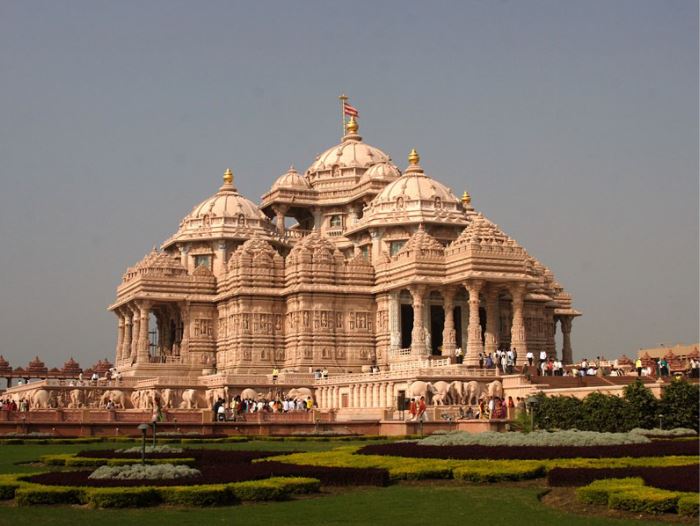 The temple is dedicated to Swami Narayan and was constructed by BAPS in the year 2005. The temple has many famous attractions from the Hall of Values which is 15 three-dimensional halls, an IMAX cinema on the life of Swami Narayan, a boat ride on the entire history of India from ancient to modern times, and finally a light and sound show. The structure surrounding the temple is entirely made of red sandstone and the temple in itself is made with marble. The temple design was inspired by the Gandhinagar temple and many of the technological wonders were inspired by a visit the Swamy's made to Disney land.

The most important and famous fort in India was built during the rule of the Mughal king Shah Jahan in 1648. The massive fort is built of red sandstones in the architectural style of the Mughals. The fort consists of beautiful gardens, balconies, and entertainment halls.

During the Mughal rule, it is said the fort was decked with diamonds and precious stones but over time as the Kings lost their wealth, they could not sustain such pomp. Every year the Prime Minister of India addresses the nation on Independence Day from the Red Fort. 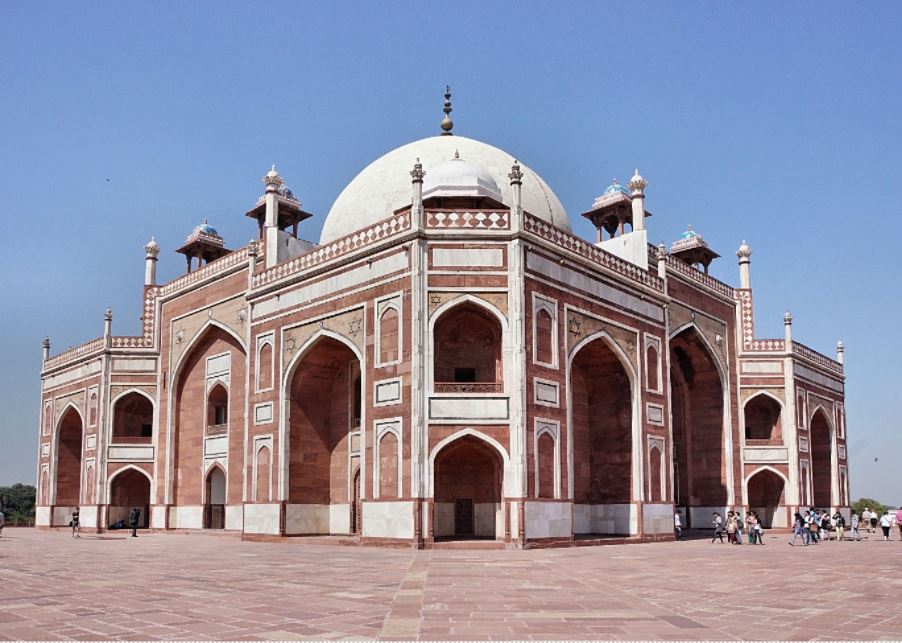 The tomb was commissioned by the Mughal king Humayun's wife Bega Begum. The entire structure is made of red sandstone and is a UNESCO world heritage site. The building is influenced greatly by Persian architecture which was a starting point to the great Mughal architecture. The monument stands not just as the resting place of king Humayun but was also a symbol of the growing political strength of the Mughal empire.

The monument was built during Qutub-ud-din-Aibak’s regime. It is a 240 feet long structure that has balconies on each level. The tower is made of red sandstone and marble. The monument is built in Indo-Islamic style. The structure is located in a park surrounded by many other important monuments constructed around the same time. The monument is also known as the Victory Tower as it was built in commemoration of Mohammad Ghori’s victory over Rajput king Prithviraj Chauhan.

The garden is sprawling over 90 acres and many famous monuments are located inside the garden. It is a famous spot for locals and tourists. The Lodhi dynasty monuments are found in the gardens from the tomb of Mohammad Shah and Sikandar Lodhi to Shisha Gumbad and Bara Gumbad. The place is extremely beautiful during the months of spring with blossoming flowers and lush greenery.

READ MORE:
Need to come to India on a business trip? Read our Business Visitor Guide. 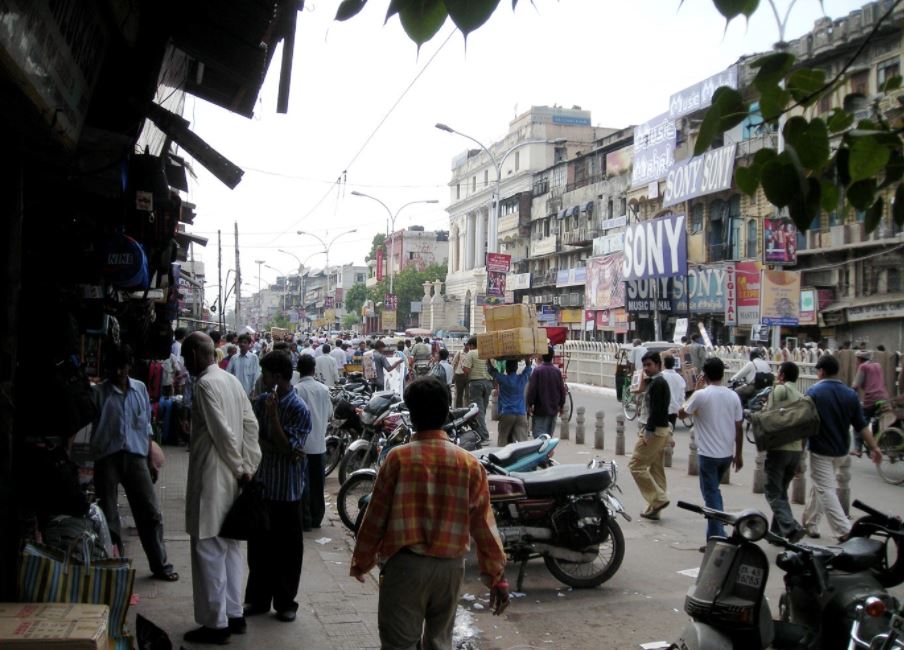 The alleys and passages of Chandni Chowk are famous not only in Delhi but throughout India thanks to Bollywood. Some of the movies where you can catch a glimpse of this age-old and prime markets are Kabhi Khushi Kabhi Ghum, The Sky is Pink, Delhi-6, and Rajma Chawal. The expansive market is divided into sections for easy shopping wherein in each section you get the best of clothes, books, handicrafts, fabrics, electronics, and whatnot. The market is a famous shopping hub for bridal couture. Again, it is recommended to avoid Chandni Chowk on Saturdays.

Timings - The market remains open Monday to Saturday from 11 AM to 8 PM.

One of the most famous places in Delhi to shop for highly budget-friendly shopping. It is one of the most crowded markets in Delhi and it is recommended not to visit on the weekends. You can purchase anything here from shoes, bags, and clothes to books and handicrafts. Students usually throng the Sarojini market as they can expand their closets without it being heavy on the pocket.

Timings - The market is open from 10 AM to 9 PM and is closed on Mondays. 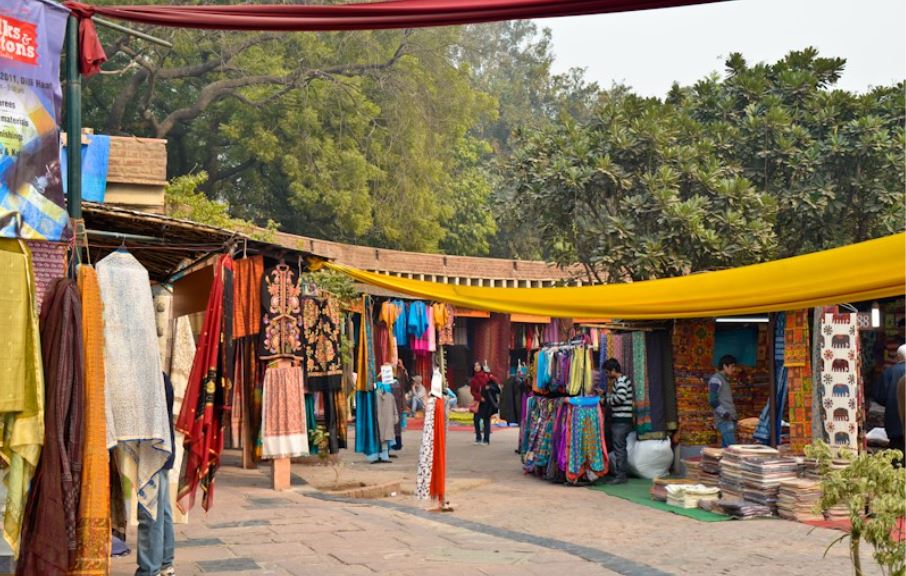 The best time to visit Dilli Haat would be in winters when it is colourful and Pinterest-worthy. The entire market has a rustic village-like look and is brimming with cultural activities. While you make your way through the various handicrafts, jewellery, paintings, embroidery works you can munch on cuisines from all over India in the specific state stalls here which authentic food.

One of the posh markets in Delhi with an amalgamation of high-end designer wear as well as street vendors. The market has everything from clothes, shoes, and bags to household items like crockery and souvenirs like handicrafts and sculptures.

Timings - The market is open from 10 AM to 11 PM but is closed on Sundays.

Other than these markets, each locality in Delhi has its market like the Lajpat Nagar Central Market, the well-known Connaught Place, the Paharganj Bazaar, the Tibetan market, and the Flower market.

New Delhi has options for every craving and flavour of every cuisine you wish to try. From exotic and foreign cuisines to humble and street favourites, Delhi has got it all.

As the capital city, Delhi has many cultural centers of not just foreign countries but every state in India as well, and the food at all of them is authentic and scrumptious. The markets like Chandni Chowk, Khan Market, Connaught Place, Lajpat Nagar, Greater Kailash markets, and many others in Delhi are also hubs for eateries where you can shop and grab a bite or a drink at the innumerous choices.

New Delhi being the capital of the country has innumerable options for a stay from renting PG's and hostels for even a short duration to luxurious and grand hotels.

Citizens of many countries including United States, France, Australia, Germany, Spain, Italy are eligible for India e-Visa(Indian Visa Online). You can apply for the Indian e-Visa Online Application right here.